We will be starting a youth 1.1 all-star prep team September 13th.  Please contact the front desk if you are interested at info@atacheer.com or 770-888-4088.  Evaluations will be held Friday, September 11th at 5:45pm. Below is the link for the packet.

Nam Nguyenvu grew up in Lawrenceville, GA and graduated from Parkview High School in 2010. He went on to college at Kennesaw State University and made the KSU cheerleading squad his freshmen year. Nam first began his involvement in cheerleading when he did allstar cheerleading at Force Elite located in Snellville, GA back in 2009. He then transitioned to Pro Cheer Allstars in the summer of 2010 to compete on the Senior Unlimited Coed level 5 team. Nam and his team placed 3rd at   the 2011 USASF World Championship. After Nam aged-out of the senior division, he ventured into coaching cheerleading for high schools and allstars. Nam has won many national titles as a coach as well as sending his teams to The Summit by Varsity throughout the years. Nam lay-coached competition cheer for Ola High School in McDonough, GA in 2013-2014 (undefeated season) and Lanier High School in Suwanee, GA in 2015-2017 (won the first ever region title for the program). Nam has judged for IEP Deep South Spirit. He is a certified judge and lay-coach for GHSA cheerleading and he is also USASF and CPR/First-Aid certified.

Lance is originally from Paterson, New Jersey. He attended and cheered for Temple University located in Philadelphia, PA. He has been involved in the cheer industry for 20 years and coached at several programs including New Jersey Spirit Explosion, Stingray Allstars, Platinum Elite Allstars, Fame Allstars, and ACX cheer. Lance is certified through USASF in all levels 1-6. Lance has been on coaching staffs to claim several National titles including NCA National Championships and a Worlds Title. Lance also works at Varsity Allstars as a judge as well as a certified USASF credentialing agent. Over the past 14 years, Lance has enjoyed doing choreography all across the country. His choreography has won multiple awards to include best dance and best choreography with Varsity. His movements flow seamlessly, his routines are clean, and he will leave you with a product that is easy to read so that his clients can perfect their routines resulting in strong finishes. Lance creates innovative and creative routines that highlight a team's strengths and will maximize the score sheets. As a coach, his strengths are being able to build progressions with all athletes and finding a way to reach any and all athletes while understanding that each athlete learns differently. He coaches with a positive outlook to make sure they feel comfortable as they grow as an athlete!

Michael, known as Murph, has been in the cheerleading industry for 16 years. Out of high school, he joined a large coed team at Atlanta Thunder X-treme where he was coached by Reed. Murph attended North Gwinnett High School, where he lettered in Football, Baseball, and Golf. After graduating in 2003, he attended Gainesville State University, now known as North Georgia. He immediately joined the coaching staff with Reed and was involved with the opening of ATL Allstars. Through his years of coaching, he has led his teams to numerous National Championships with multiple wins at NCA, UCA, and Cheersport, and coaching large coed teams to finals at Worlds. He has also coached and done choreography for middle school, high school, and allstars teams. Murph is a GHSA certified lay coach and serves as a USASF certified credentialing agent. Murph resides in Buford, GA with his wife Melissa and two daughters, Makayla and Mya, whom are both athletes at ATA!

Congratulations to all the athletes making up our 2020 – 2021 ATA Competitions teams!!  We had an unbelievable week of tryouts welcoming so many new and returning athletes.  We are completely humbled by all the talent and can not wait to get to work!

All athletes will be listed by their tryout number and first and last initials.  If you do not see your number or think there might be a possible error regarding team placement, please do not hesitate to contact us at info@atacheer.com.  Please pause the video while watching to read the names and numbers.  We did not give much time between teams.

We will be starting practice Sunday May 31st.  The schedule will be sent out Thursday night along with the coaches for your teams.

Thank you for choosing ATA and we are happy to have you all be a part of our growing Family!! We are looking forward to an amazing season cannot wait to see everyone Sunday!! 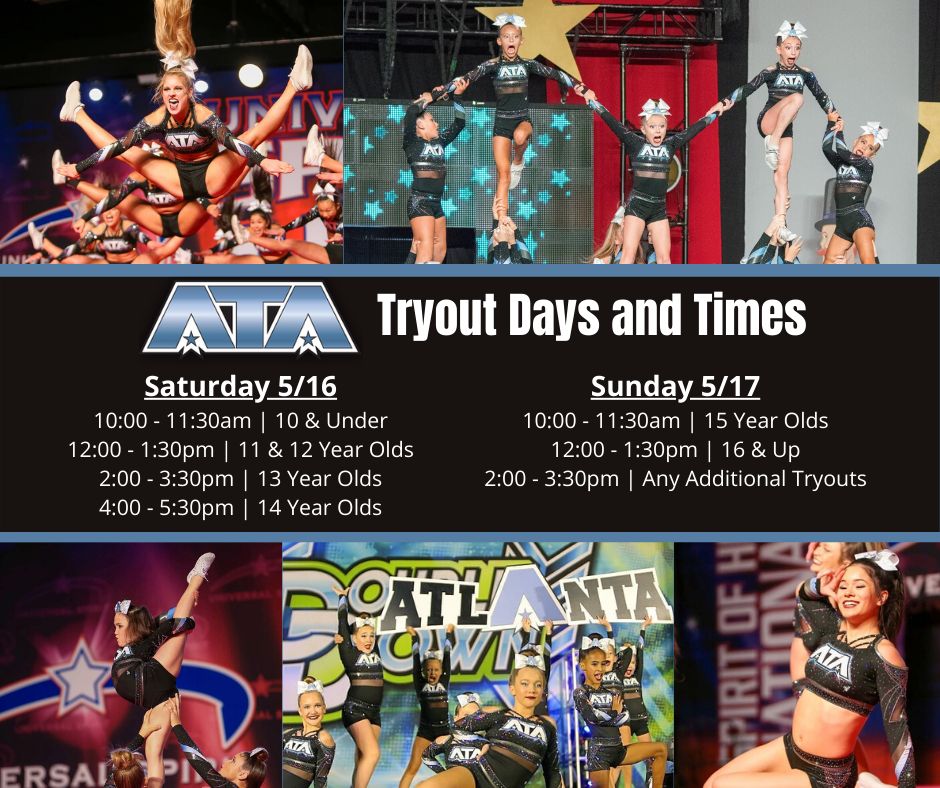 Tryouts will held Saturday May 16th and Sunday May 17th.  We will be offering individual or smaller group tryouts May 18th, 19th, 20th. Please contact info@atacheer.com for more information and scheduling.

If you are a new athlete looking to join our ATA Family and all-star program please fill out our interest form to stay up to date on current news and information.  New Athlete Interest Form

Start with the Full Body Warm up!!  Have Fun!!

Here are links for Everyone and flyers to stay in Shape and Flexible!  Please follow the Description on each Video

Back Flexibility and Bridges

Back Needle and Scorpion (Flyers Only)